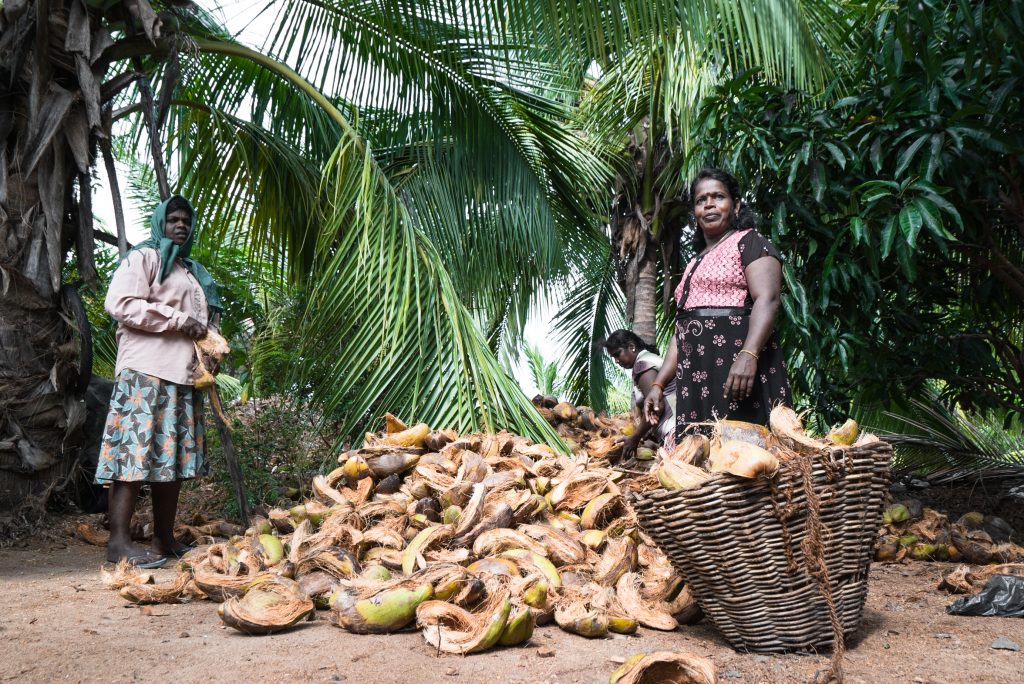 Sarojini is an entrepreneur operating a family-run business that processes coconut husks for the building industry. Living in Sri Lanka, she struggled to rebound after her husband faced a medical emergency. The two of them eventually used a grant from a non-profit, then secured a loan from a local bank. Their operation is now employing women in the community. Sarojini says she never could have prevailed were it not for a woman banker. She was able to receive support from H&M Foundation via their global partnership with CARE and local affiliate Chrysalis Foundation.

Business success seemed far from Sarojini’s reach as a child as she grew up in extreme poverty and every day was a struggle. Sarojini got used to finding ways to earn a little bit of money to survive. Today, the 45-year old is a proud business owner selling coconut chips for the building industry.

“I was very happy growing up, but we faced a lot of hardships,” Sarojini says. Growing up in Sri Lanka, her father used to travel to India on business, and one day he never returned. With four children to raise, her mother struggled to make ends meet. The family was so desperate for food that when the neighbours gave them rice gruel to wash their clothes with, they ate it.

Later, when Sarojini was married with three children, her husband had an accident which left him in a coma for four months. It was a period of great despair for Sarojini. She was so desperate for money that she pawned her house and jewelry. She spiraled into debt and was unable to repay her lenders, in the end she lost the property and was forced to move.

When her husband started to recover, he helped her to come up with a new business idea. At the time he was a driver transporting coconuts, where he saw how coconut chips are produced.

The couple secured a charitable grant for a coconut chip making machine, but also needed further funds to run, maintain and house the machine. Sarojini’s family and friends discouraged her from taking out a loan without security, but she wouldn’t give up on her business vision. “I went to six or seven different banks, one after the other, requesting a loan. First of all, they asked for assets or a property and two guarantors, but I didn’t have that. When I tried to deal with male bank managers they couldn’t understand what I had been through and I wasn’t comfortable openly discussing our poverty with them. They would casually say to me “‘amma (ma’am) we aren’t giving out any more loans’,” she recalls. 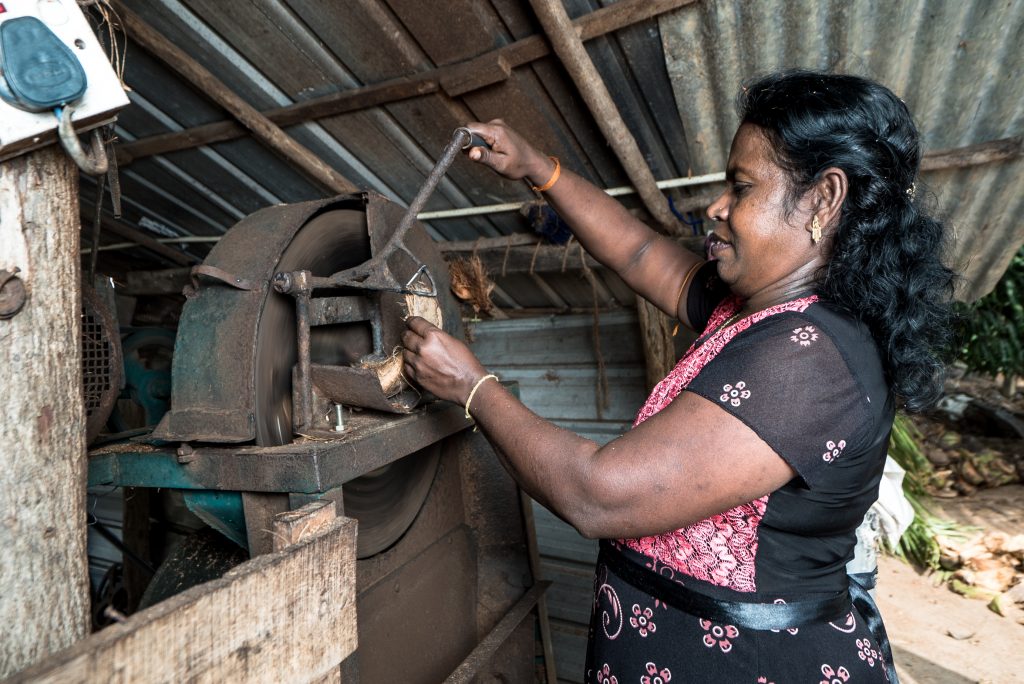 Sarojini didn’t have an income for nearly five months — she was frustrated and almost gave up. “But I thought I should try this one last bank,” she says, “I went without any hope of getting a loan. But it turned out that the bank manager was a woman, she could clearly see that I was a real business woman, employing other women and running a good business. So, I got the loan I needed! It is better if there are women working in the banks, they understand us better.”

Sarojini used the loan to purchase more coconut husks and built a temporary shed to house her machinery. Thanks to training, support, and further funding from the from H&M Foundation via their global partnership with CARE and local affiliate Chrysalis Foundation, Sarojini has built a permanent structure from which she now runs her business.

Her business continues to grow, and she now employs seven other women who, like her, have faced significant challenges in their lives. Sarojini’s own children are also helping with the business. She is not only able to support her own family, but is now enabling other women to work so that they can feed and educate their own children.

Her ambition is to expand the business into making end-products from the coconut chips so that she can employ more women from her community. She adds: “My wish is that my business remains stable and sustainable. I want my employees to grow in confidence and I want to provide jobs for more unemployed people and make them feel proud.”