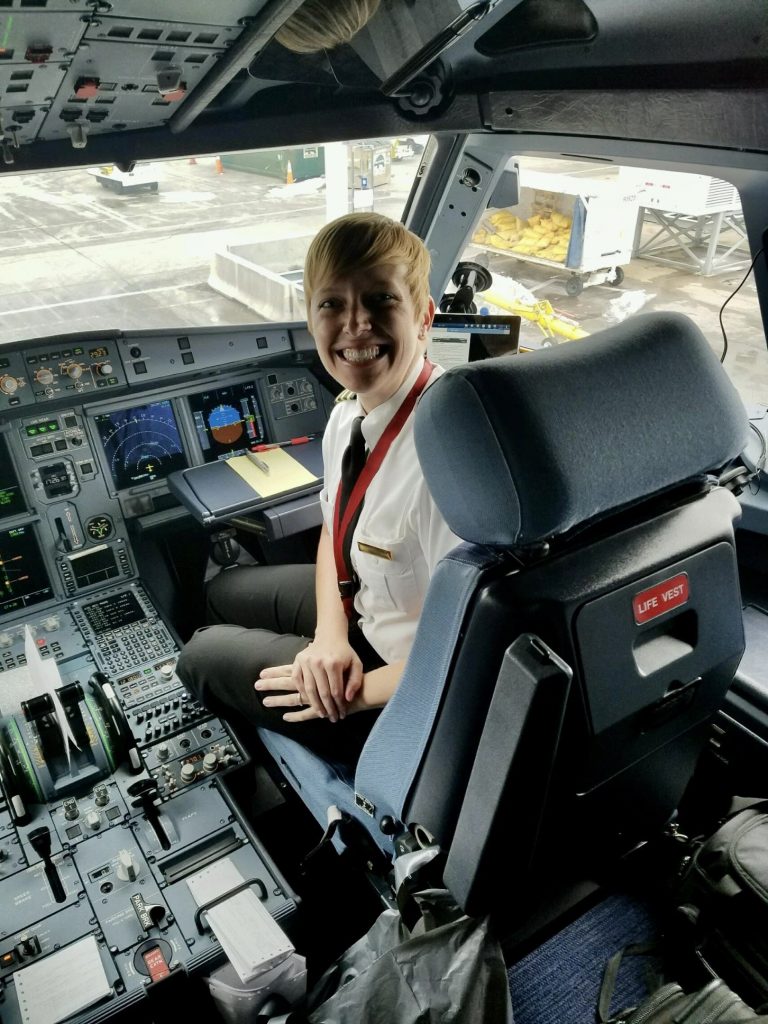 Jessie Elliott is a pilot for a major U.S. airline. She is prevailing in a male-denominated profession, opposes gender stereotyping, values workplace inclusion, and believes in generous paid family leave, including paternity leave.

Equal everywhere means to me that girls, and boys, can grow up dreaming about what they want to become without thinking, “I can’t do that because that is for boys” or “that is for girls.”

Equal everywhere means lifting up all women and minorities to the same status and worth as men so we all have the ability to influence the decisions that affect our lives.

Personally, it will mean people won’t be surprised to see me in the flight deck of a large jet — instead of identifying me as a “female pilot,” I will simply be considered a pilot.

I advocate because the battle for gender parity is far from over, including in my industry. After I cleared my probationary period at my current job, I submitted a resolution requesting a change in the non-discrimination clause in our union contract. While my company has a robust equal opportunity statement that complies with U.S. Equal Employment Opportunity Commission requirements, it had not evolved to accommodate the changing pilot population. Around this same time, I joined a group of female pilots and we created a new committee within our union that aims to guide our peers as they navigate challenges related to maternity leave, health care benefits during in-vitro fertilization, and other issues. We also created web content to tackle issues such as sexual harassment, sexual assault, discrimination, and LGTBQ concerns. Additionally, I have joined our union’s Government Affairs Committee and am able to speak directly to members of Congress and to my own union leadership about issues that female pilots and minorities face daily.

I also advocate simply by being visible. At the end of every flight, I try to complete all of my post-flight duties as safely and efficiently as possible, then open the flight deck door to say goodbye to everyone. Often when young girls and their parents see a woman flew the airplane, the girls just completely light up and smile. I try to invite these kids into the flight deck and let them take pictures. Also, on nearly every flight, a woman passenger gives me a thumbs up or cheer as they disembark. Seeing is believing. When I have time, I speak to young kids at schools. I have also visited a few different high schools and college career programs to share my experience as a pilot and I never hide the fact that we need more girls interested in this industry.

Another reason I advocate is that I am somewhat of a pioneer, given how few of my fellow pilots share my gender and sexual orientation. Given my unique position, I constantly advocate to the pilot majority about the issues that women, minorities, and LGBTQ pilots face. I know that great advances can occur if you generate majority buy-in. I work hard to build solid relationships and create alliances with my male co-workers. Later, I engage these allies to speak up for women and minorities to the majority leadership.

I love my job and I want more people across all backgrounds to have the opportunity to pursue their dreams as I have. I am just as capable of piloting an advanced jet aircraft as any man. I know that any person is capable of this, regardless of gender identity, race, sexual orientation, or background. I want every person to have a fair chance to pursue their dream career because I know how fulfilling it is.

As a female airline pilot, the two major challenges that I experience are resistance from the majority group, and the prevalence of a diversity-only mindset versus inclusion-oriented mindsets.

Minority groups within my industry have the impression that, if they want to succeed, they need to “just be like one of the guys”. This resistance mindset opens the door for sexual harassment and sexual assault. The diversity-only mindset problem started showing up in the airline industry back in the 1990s when several airlines grappled with equal opportunity discrimination cases, after which a wave diversity hiring ensued, with marginalized groups given priority when applying for jobs. Airlines started hiring minorities without adapting the workplace for these new group identities, which in turn caused many minorities to leave the industry before completing a full career. Corporations and majority groups sometimes resist the idea of adapting workplaces for new groups due to costs. Instead of focusing on diversity, corporations should focus on inclusion to make sure that everyone feels welcome and safe.

Progress in the airline industry is slow and quiet. More and more girls and minorities are getting into flight training. Minority numbers are improving at the regional airline level. Internally, many airlines are creating opportunities where promotions can be obtained based on merit and educational opportunities which aid in future advancement are now offered to everyone. Airlines are highlighting inclusion wins and companies are targeting minorities more heavily in their recruiting efforts.

I see more companies focusing on diversity as well as inclusion. I see women and minorities refusing to remain quiet about change. I see a great number of straight, white men also advocating for equality and demanding change. I see people working together to inspire change, across all industries.